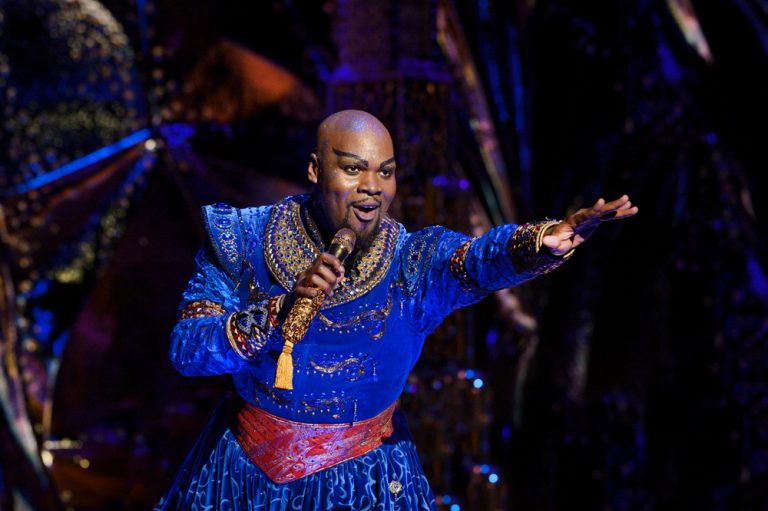 Quite often, folk miss out on mainstream entertainment and outings because of challenges such as accessibility and sensory sensitivities.

Stage musicals are a typical example. The bright lights and loud sounds of big productions can be too overwhelming for many to enjoy.

Unless of course something special is organised.

Like the autism-friendly performance of Aladdin the Musical coming up at Her Majesty’s Theatre in Melbourne on Saturday August 12th.

The blockbuster which has entertained over 3 million people worldwide since opening on Broadway in 2015 follows the adventures of Aladdin with his magic carpet, lamp and genie.

“Many members of the autism community love the movie Aladdin and are excited to see the live production,” says Dierdre Hardy of Amaze, Victoria’s peak advocacy body for people with autism, which Disney has partnered with on the production.

Aladdin is one of the biggest musicals to be staged in Melbourne – and probably one of the most exotic –  boasting over 300 costumes using over 500,000 Swarovski crystals.

“It’s a world class production with a fantastic cast: an exotic setting, great songs and a love story. What’s not to love?, “Hardy said.

As people on the autism spectrum can be hyper sensitive to light and sounds, adjustments to the production will include removal of strobe lighting and some other features. But the show will remain full of energy according to Hardy.

“The venue house lights will be left on and some of the loud features, such as pyrotechnics won’t be used.”

“There will also be ‘social scripts’ provided so people can know what to expect.”

The ‘social scripts’ are booklets which explain how the performances will deliver the story as well as provide advice on what to do when there’s applause.

The audience will also be allowed to leave the theatre for breaks whenever they want to.

Hardy says “Amaze often hear[s] from parents that that they feel more comfortable taking their children to inclusive events where they know their child can enjoy it in their own way – some may even wear headphones during the session.”

Raising awareness among the performers, stage crew and theatre staff about autism has been important for Disney and Amaze.

“These adjustments are fully embraced by the cast who are looking forward to bringing Aladdin to a new group of people, in a new way.”

“The other heartening aspect is that we have had many volunteers offer to come along on the day to provide any additional support that might be needed. We have had to cap it at 40 volunteers!”

All signs are that Disney won’t stop its special presentations with this production.

As Hardy reminds us “Disney put on a sensory session of the Lion King in Sydney last year and the cast were thrilled to see people dancing in the aisles!”

The autism-friendly performance of Aladdin – The Musical will be staged at Her Majesty’s Theatre in Melbourne on Saturday August 12th, 2017 at 1.30pm

We acknowledge the Traditional Custodians of lands, seas, and waters throughout Australia, and pay respect to Elders past, present and emerging.

Hearth is committed to providing the highest standard of individualised support for Aboriginal people with a disability and Hearth recognises that the wellbeing of Aboriginal and Torres Strait Islander peoples are grounded in continued connection to culture, country, language, and community.

We use cookies on our website to give you the most relevant experience by remembering your preferences and repeat visits. By clicking “Accept All”, you consent to the use of ALL the cookies. However, you may visit "Cookie Settings" to provide a controlled consent.
Cookie SettingsAccept All
Manage consent

This website uses cookies to improve your experience while you navigate through the website. Out of these, the cookies that are categorized as necessary are stored on your browser as they are essential for the working of basic functionalities of the website. We also use third-party cookies that help us analyze and understand how you use this website. These cookies will be stored in your browser only with your consent. You also have the option to opt-out of these cookies. But opting out of some of these cookies may affect your browsing experience.
Necessary Always Enabled
Necessary cookies are absolutely essential for the website to function properly. These cookies ensure basic functionalities and security features of the website, anonymously.
Functional
Functional cookies help to perform certain functionalities like sharing the content of the website on social media platforms, collect feedbacks, and other third-party features.
Performance
Performance cookies are used to understand and analyze the key performance indexes of the website which helps in delivering a better user experience for the visitors.
Analytics
Analytical cookies are used to understand how visitors interact with the website. These cookies help provide information on metrics the number of visitors, bounce rate, traffic source, etc.
Advertisement
Advertisement cookies are used to provide visitors with relevant ads and marketing campaigns. These cookies track visitors across websites and collect information to provide customized ads.
Others
Other uncategorized cookies are those that are being analyzed and have not been classified into a category as yet.
SAVE & ACCEPT